A group or family dining experience was an important feature in the wealthiest homes of Georgian Britain, with contemporary sources describing many hours spent around the dining table, and the importance of presentation in both the food and the fixtures! 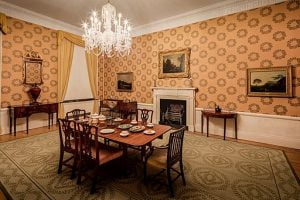 The dining room was an elegant and well fitted room in the Georgian period and was adorned with quality pieces of furniture that were both stylised and highly functional. 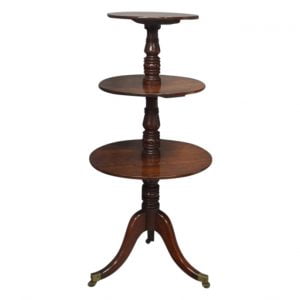 A dumb waiter could often be found to the side of the dining room. There are two forms of furniture known as a ‘dumb waiter’ (neither to be confused with the mechanical food lift). The Georgian iteration had revolving circular tiers on a column and would hold crockery and could also be used in the drawing room. The later rectangular dumb waiter with long, rectangular shelves was also used to hold dishes and food prior to it being served. You can see our range of dumb waiters and buffets/serving furniture here.

The dining table also had several pieces on or around it which helped the dining experience run smoothly.

Cheese coasters were used (as their name suggests) to store/hold cheese on the dining table. Their boat shaped design with scooped out centres accommodated a series of cheeses. 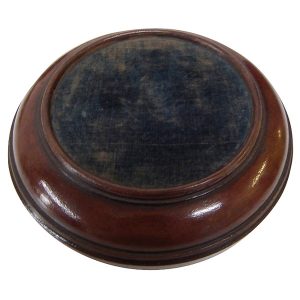 Wine coasters (like the one to the right) were sometimes made in mahogany and were fitted with bun feet or leather castors, which allowed the wine to be manouevred easily around the dining table without leaving any scratches. Silver or silver plated wine coasters were more common than their mahogany counterparts.

Sitting alongside the table would be a wine cooler or cellarette, with a lead lined interior which filled with ice from the ice house, kept the champagne and wine chilled. The rectangular, lockable ‘liquor case’ or guarduvin were also used to store spirits. 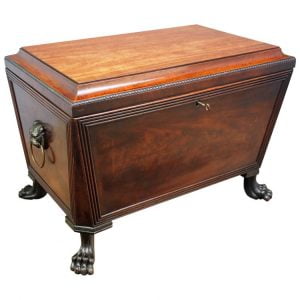 A common feature of Edinburgh-made Georgian brass bound wine coolers were open fretwork quarter brackets at the top of the legs and a particular inlaid design. The sarcophagus shaped wine cooler later became fashionable, and its low height allowed it to fit beneath a sideboard.

And last but no means least – where to keep your expensive and desirable silverware? 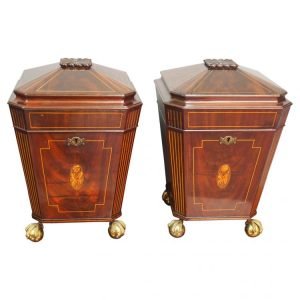 Knife boxes and cutlery boxes were only owned by wealthy families in the late 18th and 19th centuries, and were often in the style of the most important designers of the day including Hepplewhite, Sheraton and Adams. They were generally made in pairs, with one placed either end of a sideboard. For those wanting to display their silverware engraved with the family crest, the lid could be left open.

It’s worth noting that most of these dining room fixtures would only be found in the wealthiest Georgian homes, as the majority of society would have instead cooked and dined around the kitchen fireplace. These Georgian dining room pieces still serve a practical purpose today, as well as being important historical reminders of the fine art of dining.