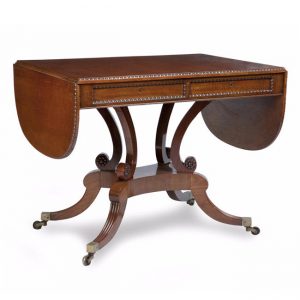 William Trotter was one of Scotland’s finest and certainly one of Edinburgh’s greatest cabinet makers, whose distinctive furniture is recognisable by its style and excellent quality.

His grandfather was Thomas Trotter born in 1691, who was a member and founder of the Edinburgh Merchant Company.  William established himself in his sole right in 1805 after various partnerships in Princes Street, Edinburgh and traded there until his death aged 61 in 1834.

Trotter had a very distinctive style that he used constantly on his furniture, such as the quillingon the sides of his dining tables or the fine beading he used on his drawer fronts, and the quality of timber he used to execute his furniture. Like other cabinet makers of the day, he was influenced by what was going on outside of Edinburgh with the London styles and classical revivals that occurred at this time. 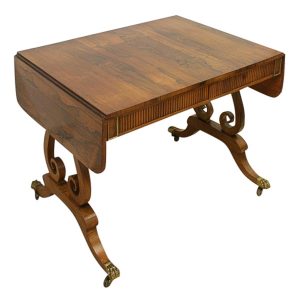 You could describe some of the techniques Trotter used as ‘thrift worthy’, for example on this sofa table (pictured left) there is what appears to be ormolu mounting framing the drawers and the wee panels at each end.

On close inspection during the repair on one of these tables it was found that it is in fact lead which had been cut to size and then painted on with gilding before it was applied to the piece of furniture. At a distance it looks like proper ormolu mounting. The economics of it were he could cut this metal to any shape and gild it before applying it, thus saving a lot of money in the 1810-1820 period. 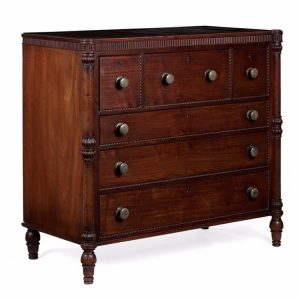 By contrast, on this particular chest of drawers (pictured right) the beading was actually cut out of solid wood and recessed. This was a very expensive process where the cabinet maker would actually have had to hand carve the beading. Another unusual feature of this chest is the handles are made from turned cow horn. This would have been a very expensive process to achieve almost 200 years ago.

William Trotter’s most famous commissions were the Paxton House contract in 1814 for John Holme Robertson MP and the other for the Signet Library which was circa 1822. He also had a fantastic career outside of cabinet making, becoming a member of the Edinburgh Merchant Company and master of the Company in 1819. He went on to become Lord Provost of the City of Edinburgh (the Scottish equivalent of a Lord Mayor of an English city, with more powers).